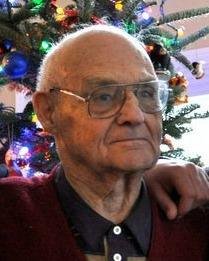 Danielson, William E. Provost, 94, of Danielson formerly of Bristol passed away on, June 18, 2017 at Day Kimball Hospital.
He was born in Bristol on February 5, 1923, the son of the late William C. and Asunda (DiMeola) Provost.
He worked for many years for local Automotive dealerships until he retired. William was an umpire for the Pony League in Bristol and was a member of St. Joseph Church.
His wife Martha H. (Glasson) Provost passed away in 2002.
He is survived by a daughter, Gail L. Rogers of Dayville and a sister, Dorothy Mikulak of Cape Cod, MA. 2 grandchildren, Kevin CJ Rogers and Kristopher W. Rogers. And 1 great granddaughter, Serenity  Rogers plus several nieces and nephews.
A Mass of Christian Burial will be held at a later date. There are no calling hours.  Burial was held in St. Joseph Cemetery.  Dunn Funeral Home 191 West St. Bristol is in charge of the arrangements.

To order memorial trees or send flowers to the family in memory of William E. Provost, please visit our flower store.