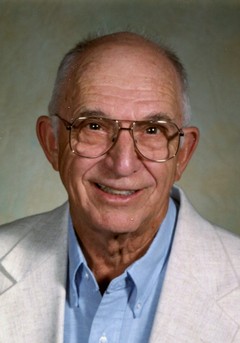 MEYER, WILLIAM (BILL) F., SR. Bill Meyer Sr., 92, of Torrington, passed away October 25, 2015. He was the husband of Fayne (McCaffrey) Meyer. Bill was born in Torrington, December 2, 1922, the son of the late Victor and Carrie (Porter) Meyer. He was a resident of Torrington his whole life and graduated from Torrington High School Class of 1940 and Teacher’s College of Connecticut Class of 1952. He was a Teacher at Torrington High School for 33 years before he retired in 1986. Known to his students as Bio Bill. He enlisted in the United State Navy, April 26, 1943. He was assigned to the aircraft carrier USS Antietam and saw duty at Guantanamo Bay, Cuba, Pearl Harbor, Oahu, Hawaii, Okinawa, Peking,Tsingtao, China, Guam, Tokyo, Japan and Saipan. Received awards of American Theater Medal, Victory Medal, Good Conduct Medal, Asiatic Pacific Medal and Aerial Gunner and Air Crew Wings. He loved going to the reunions with all his Navy buddies throughout the country. Bill was a member of National State and County Grange and Past Master of Hope Grange in Torrington. He was a Life Time member of the BPOE Lodge # 372 where he was a former Elk of the Year. He was president of the Norfork Trout Fishing Club, member of Germania Singing Society, Torrington Veterans of Foreign Wars, Torrington Fish and Game, Former Chairman of Torrington Conservation Commission and member of Board of Trustees of Heritage land Preservation Trust. Also a member of the First Congregational Church, in which he was the longest living member at the church. He planted gardens for the Senior Citizen Centers for many years. Bill loved to travel anytime, anywhere with family and joined trips with his sister-in-law Joan and her family throughout Europe and cruises to Alaska and Hawaii. He was an avid fly fisherman. He wintered the last several years in Florida for the winter with his adopted son and daughter-in-law Brian and Connie. Always wondering how was the ice fishing back home. Besides his wife of 66 years, he is survived by 4 sons, William (Skip) F. Meyer, Jr. and his wife Pamela of South Bend, Indiana, Gerrard F. and his wife Anita of Arlington, Texas, Richard F. and his wife Colleen of Torrington, Jeffrey F. and his wife Nancy of Bristol. Two sisters, Jean Hurlbut and Vima Lejeune, both of Winchester. Sister-in-law Joan McLaughlin of Torrington. 10 grandchildren, Jennifer and her husband Robert Fernandez, Jill and her husband Jon Hudson, Erica Meyer,Melissa and her husband Patrick McAuliffe and Michael his wife Michaela Meyer, Christopher Meyer, Lindsey and her husband Ashton Daniel, Megan, Mark, and Madison Meyer. Six great-grandchildren, Olivia, Mason, Ellie, Kaleb, Kaylee and Stella. He is predeceased by four brothers-in-law, Alexander Lejeune, Larry Hurlbut, Robert McLaughlin, John McCaffrey and his wife Marion. A church service will be held on Wednesday at 11:00 AM at The First Congregational Church. Friends may call at Phalen Funeral Home 285 Migeon Ave. Torrington on Tuesday from 5 to 8 PM. www.Phalenfuneral.com -

To order memorial trees or send flowers to the family in memory of William F. Meyer, Sr., please visit our flower store.