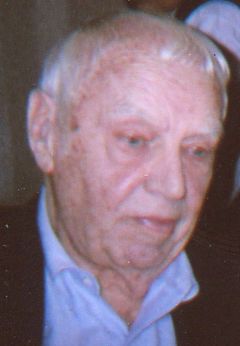 Norman W. Odlum, 91, died on August 27, 2014 in New York City. A native of Bristol Connecticut (BHS 40). Norman served the United States Navy during World War II. After the war he moved to New York City to study, under the auspices of the G.I. Bill of rights at New York University where he received his BA in 1949. In January 1950 he joined the SESAC, the music licensing organization, and was employed there except for a leave of absence to serve again in the Navy return the Korean War, until his retirement and early 1990s as a vice president.

A celebration of Life for Norman Odlum and Xavier Sanlier-Lamark will be held on Sunday, October 5, 2014 at 1:00 PM to 3:00 PM at 27 West  55th Street New York, New York.
Burial will be at the convenience of the Family in St. Joseph Cemetery, Bristol, CT.

A special Thank You to Altia, Margaret, Michelle, Tomasina and Val - his wonderful care givers.

In lieu of Flowers, please make a contribution to a charity of your choice or do a good deed.


To order memorial trees or send flowers to the family in memory of Norman W. Odlum, please visit our flower store.