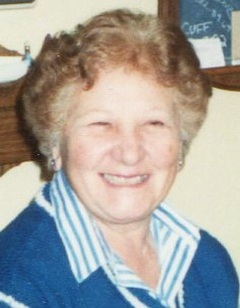 Mary (DiSabato) Dâ€™Andrea, 96, passed away August 3, 2015, at Litchfield Woods Convalescent Home in Torrington. She was the widow of Vincent Dâ€™Andrea.

She was born in Bagnoli, Irpino, Avellino, Campania, Italy on May 13, 1919, the daughter of the late Vincenzo and Theodosia (Patrone) DiSabato.

She was predeceased by her four brothers, Guiseppe, Tommaso, Elvio and Vito, and a sister, Josephine. She emigrated to America with her family in 1930 when she was 11 years old. The family settled in Bristol and lived on Summer Street.

Mary was known for her love of golfing, sewing, needlework and cooking for her family.

Friends may call at Dunn Funeral Home, 191 West St. Bristol, on Thursday from 10 to 11 a.m. Service will be held at 11 a.m. Burial will follow in St. Joseph Cemetery, in Bristol.

To order memorial trees or send flowers to the family in memory of Mary D'Andrea, please visit our flower store.