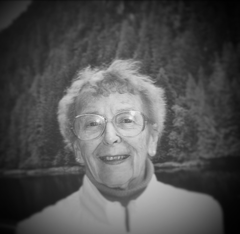 Mrs. Joan (McCaffrey) McLaughlin passed away on Monday, November 16th, 2015 at her residence with her family by her side.
Joan was born March 20, 1929 in Torrington, the daughter of the late John J. and Veronica (Murphy) McCaffrey. A lifelong resident of Torrington. Joan worked at the Torrington City Clerkâ€™s Office for over 20 years before retiring, and in 2006 served as â€œIrish Lord Mayor of the Day" for the city's St. Patrickâ€™s Day Celebration. In her retirement Joan enjoyed traveling with her sister, children, and their families to many different locations in the U.S. and Europe.
Joan is the widow of the late Robert F. McLaughlin. She is survived by sister, Fayne (McCaffrey) Meyer and five children: Colleen and her husband Donald Williams, Thomas McLaughlin, Brian McLaughlin and his wife Andrea, Susan and her husband William Schapp, and David McLaughlin and his wife Cindy. Her nine grandchildren: Meghan Williams, Patrick Williams, Steven Schapp, Robert Schapp, Michelle Schapp, Brianna McLaughlin, Andrew McLaughlin, Murff McLaughlin and Mac McLaughlin.
Joan was pre-deceased by her brother, Jack McCaffrey and his wife Marion, brother-in-laws William F. Meyer, Peter McLaughlin and his wife Mary, Thomas McLaughlin, and sister-in-law Veronica McLaughlin.
Joanâ€™s family would like to extend a sincere thank you to her caretaker, Jemma Gomez, for her skilled assistance, support and friendship during the last few years of Joanâ€™s life.
A Mass of Christian Burial will be celebrated at St. Francis Church at 11 AM on Thursday, November 19th, 2015, with burial following at Hillside Cemetery. Friends may call on Wednesday, November 18th from 5-7 PM at Phalen Funeral Home, 285 Migeon Avenue, Torrington, CT.

To order memorial trees or send flowers to the family in memory of Joan McLaughlin, please visit our flower store.