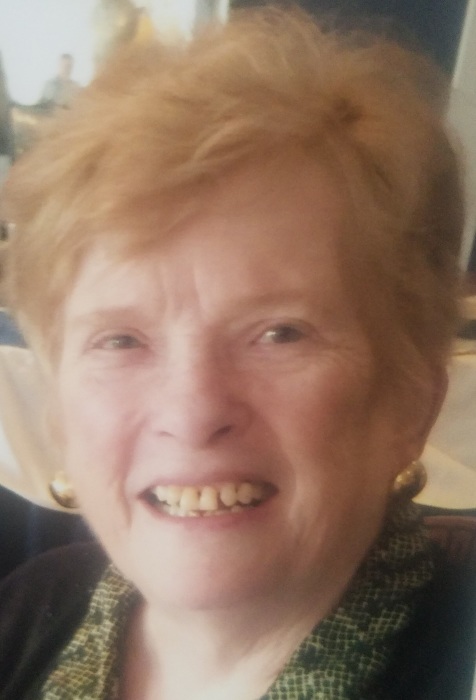 Elizabeth (Foy) Finn, 76, of Plainville passed away Monday, December 11th at The Hospital of Central Connecticut in New Britain, after a brief illness. “Betsy” was born October 3, 1941 and raised in Ansonia, CT the daughter of the late James and Elizabeth (Hickox) Foy. She graduated from Ansonia High School at the age of 16 and went on to receive a Bachelor of Arts degree in education from Southern Connecticut State University in 1961. After which she worked as an elementary school  teacher in the Ansonia Public School system. Betsy learned to fly a plane in 1962, and having driven in a car with her for years, we assume most of her skilled vehicle operating was done in flight. She met her husband of 52 years, Robert (“Bob”) Finn, on a blind date in 1964. After marrying in 1965 they lived in the Valley, relocated to East Haven in 1969, finally settling into their family home in Plainville in 1978. It was always difficult for Betsy to part with things she treasured – as such, the family is now looking forward to finding deserving homes for a variety of items including a 43-year anthology of Reader’s Digest Condensed Books, a collection of 600+ cook books and approximately a quarter-ton worth of every variety of pot and pan sold to man in the last 40 years.  While raising her family, she was actively involved as a volunteer with the Girl Scouts of the USA. Betsy returned to work full-time at the CT Student Loan Foundation and later took a position with the Connecticut Department of Motor Vehicles (DMV) in 1986. She quickly learned that working at the DMV was an even more painful plight than having to visit there. Betsy made the most of it – she was efficient and assiduous and remarkably pleasant-tempered when dealing with the public. After completing her 17 year sentence she was rewarded with an early retirement from the State and gifted with having made lasting friendships with several kindred-spirited coworkers. Betsy enjoyed hosting family dinners and keeping holiday traditions. At all times modest, gracious and accepting, she had a strong Catholic faith and remained a staunch New Englander until the end. She relished a more leisure lifestyle in retirement and spent time travelling, attending cultural performances, preparing gourmet meals, reading and working on Sudoku and crossword puzzles. She enjoyed watching Jeopardy!, The Food Network, any and all BBC-productions, reruns of Everybody Loves Raymond and may have single-handedly contributed to Rizzoli and Isles being renewed for its final two seasons. By far the greatest gift retirement brought her was freedom to devote time and adulation to her four cherished grandchildren, Nicholas and Catherine Yurko and Michael and Elizabeth Fitzsimmons. Betsy suffered from deteriorating hearing loss for many years, receiving little relief from hearing aids. While her affliction was sometimes frustrating and isolating it was also a source of some comical responses and gaffes. Her grandchildren were particularly amused by Grandma and PopPop’s miscommunication blunders. Always thoughtful, generous and kind-hearted Betsy will be deeply missed by her extended family of nieces, nephews, cousins, godchildren and many friends, especially one of her closest and dearest friends of more than 65 years, Jeannette Olechnowich. She was predeceased by her sister Barbara Foy and brothers James and Michael Foy. Besides her husband and grandchildren she is survived by her children, Christine (Rick) Yurko of Oakton, VA, Patrick Finn of Plainville, and Micaela (Brian) Fitzsimmons of Kensington who will remain forever grateful for her wisdom, devotion, unconditional love and many amusing “Betsy” stories which will be recounted for years to come.  Betsy loathed the limelight and would have disliked this being written about her, but she herself was an avid reader of the “Irish Sports Pages” so we hope she looks down upon it as a testament to how her friends and family will laugh, cry and remember her well-led life. A Funeral Mass will be held at 10:00 AM on Thursday, December 28 at Our Lady of Mercy Church, 94 Broad St., Plainville, CT. Burial will follow in St. Joseph Cemetery, Plainville. In lieu of flowers, memorial donations can be made to The Plainville Community Food Pantry, 54 So. Canal St., Plainville, CT 06062 www.plainvillefoodpantry.org Online condolences can be placed and viewed at: www.Dunnfh.com

To order memorial trees or send flowers to the family in memory of Elizabeth Finn, please visit our flower store.