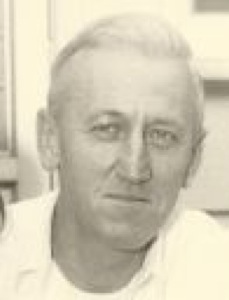 Chester Frank Brzozowski
Chester Frank Brzozowski (N1JRX) went to meet his beloved wife Mary "Cuffy" (Barlowski) Brzozowski on the morning of January 13th, 2012. Born in Gil, MA on May 5th, 1923 to the late Frank and Esther (Golonik) Brzozowski, Chester grew up in the MA area and graduated Deerfield High in 1942. He moved to CT shortly after and went to work as a machine repair technician at the Allen Manufacturing Company until he went to serve his country in the Army during WWII. Chester was a medical technician with the 289th Station Hospital in the Pacific Theater. Upon his honorable discharge he returned to the Allen where he worked until his retirement in 1985. Chester was an avid Red Sox fan and after loosing his sight in 1994, he still continued to listen to the games. In 1990 Chet became a licensed ham radio operator and went all over the world without leaving his house. He made hundreds of contacts over the network and formed many strong bonds and friendships. He was a member of NARL and until recently, the Chippens Hill Repeaters Association. He was a long time member of Saint Stanislaus Church. Chester leaves his sons, Raymond Brzozowski of Bristol and Joseph of Burlington who was his number one daily care giver for the last several years, his daughter and son-in-law, Corinne and Thomas Aubin of Farmington, his two grandsons, Adam Brzozowski and his wife Rachel of Bozrah, Jason Brzozowski of Bristol as well as several nieces and nephews. His brother Walter, his sisters Jenny and Irene, and a stepsister Nellie predeceased him.

A Mass of Christian Burial will be held Monday at 10:30 a.m. at St Stanislaus Church. Burial with military honors will follow in St Joseph Cemetery.
Friends may call at the Dunn Funeral Home 191 West St. Bristol, CT 06010 on Monday from 9:00 am until 10:00 AM.

In lieu of flowers, donations may be made to American Radio Relay League Inc. at 225 Main St., Newington, CT 06111.
WWW.Dunnfh.com


To order memorial trees or send flowers to the family in memory of Chester Frank Brzozowski, please visit our flower store.