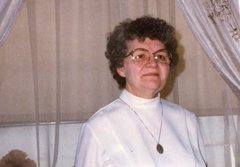 
She was born in St. Agatha, Maine, on May 3, 1918, the daughter of the late Josephel and Marie (Albert) Ayotte. She was a resident of Bristol and Meriden and worked at Carrebetta Apartments and International Silver for several years she was a member of St. Ann Church and the Army of Mary of St. Ann Church in Bristol.


She is survived by a son, Ron and his wife, Diane, Nadeau of Granby; a daughter, Kathleen and her husband, Robert Wills, of Terryville; an adopted son, William Nadeau and adopted daughter, Kelly Bowes, both of Naugatuck; a brother, Alcide Ayotte of Plainville; two sisters, Marie Pelletier of Bristol and Hilda Bosse of Caribou, Maine; four grandchildren, Ron, Chris, Michael and Robert; two great-grandchildren, Alyssa Bowes and William McDonald; plus several nieces and nephews.


The funeral will be held on Thursday, Feb. 27, 2014, at 9 a.m., from Dunn Funeral Home, 191 West St., Bristol, to St. Ann Church for a Mass of Christian Burial at 10:30 a.m. Burial will be private in St. Laurent Cemetery, Meriden. Friends may call on Thursday from 9 to 10 a.m.
To order memorial trees or send flowers to the family in memory of Annette Nadeau, please visit our flower store.